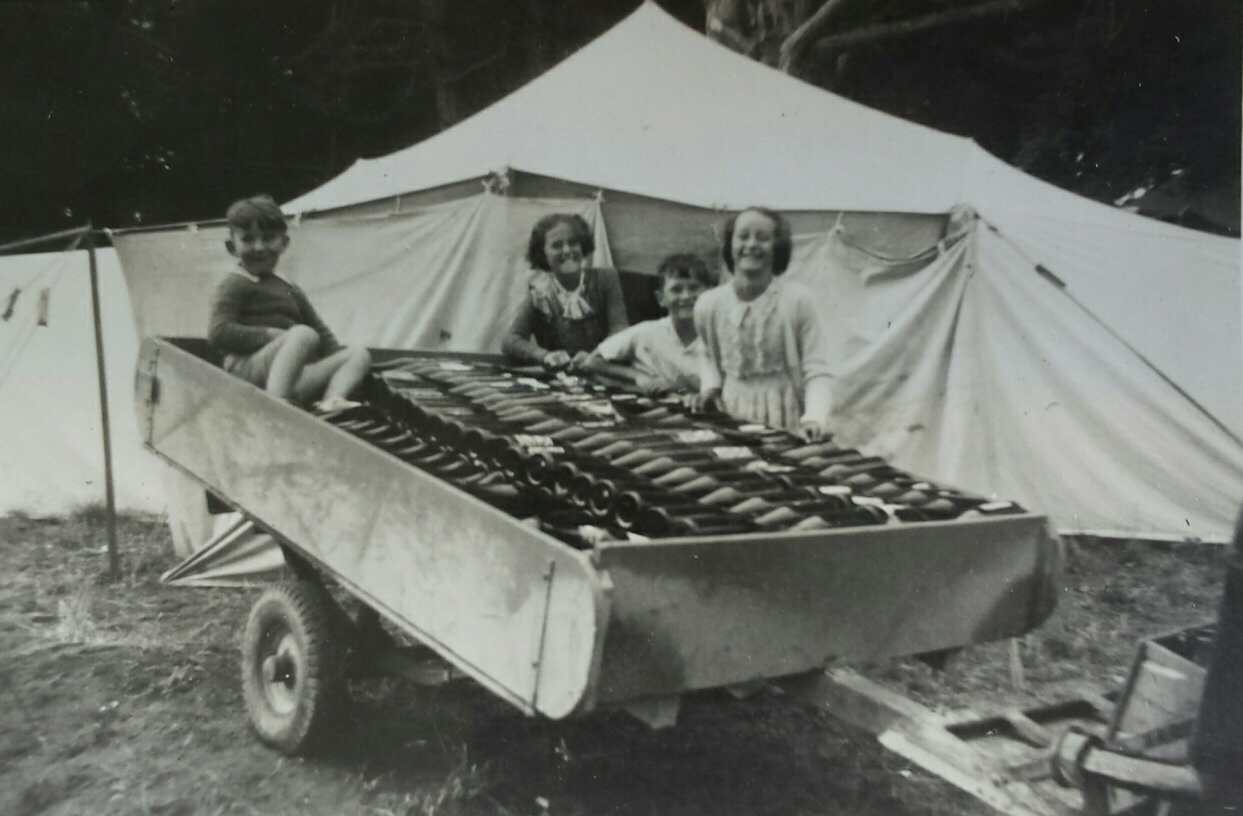 My first memories of holidaying at Tahuna Beach Camp start in the 1940s. We lived in a small coal mining town on the West Coast and every year for our annual holidays we came up to Tahuna for a month. It seemed like most of our street in Dunollie came too, plus many others from Runanga.

We had the same campsite every year and started with a square tent with a centre pole. Eventually Mum (with her old singer sewing machine) made annexes for the tent. Later we upgraded to a trailer camper and then on to caravans.

Our journey to Tahuna would always start at midnight. We kids were put to bed early so Mum and Dad could pack the trailer. Of course we never slept, because we were so excited.

We wouldn’t have slept anyway, because there was always an argument about what to bring when packing the trailer. Mum kept a list so that each year she knew exactly what we needed. Dad always thought half of it should stay at home, so each year (the annual holiday argument we called it) started. Dad had a standard list of *swear words* he would use as Mum brought even more stuff out for the trailer. Eventually midnight would arrive and my brother and I were bedded down on the back seat of the car ready for the seven hour journey ahead. The gravel road was winding and full of ruts and potholes!

Arriving at Tahuna Beach Camp around seven in the morning, we were off to explore while the trailer was unpacked and the tent erected. Then we went to the beach for a swim. Crossing the mudflats was a highlight – in our new plastic sandals we watched the crabs scurrying away from our feet as we walked through the water. It seemed so far when we were little. I thought we were walking to Australia! It also took us a long time to walk up to Kozy Corner milk bar for an ice cream soda. On the way we passed by a wonderful garden full of garden gnomes and all sorts of things that small children loved to look at. It was a very special place and was there for many years.

Pocket money was quite hard to come by for us kids so each year we camped my brother and I would get up at day break each morning to gather bottles from the previous night’s drinking sessions. We put them into sugar bags or small sacks and managed – with difficulty – to get them back to our camp site and stack them onto the trailer. When the trailer was full Dad would take them to where you sell bottles and cash them in. We got one penny for the beer bottles and I think it was threepence or sixpence for the soft drink bottles. We would then share out the money. My brother to this day insists that he did the work and I got most of the money. I vividly remember the times when the trailer was so full we would stack the extra bottles under our beds. Our beds were canvas stretchers, I don’t think we had mattresses. I do remember lying on top of the bottles and how uncomfortable they were, and the noise they made as we tossed and turned while trying to sleep.

Those were the days without any sort of electronic distractions. I believe that is why our holiday times were so filled with fun and enjoyment doing all sorts of simple things. We would go home with lots of memories as well as names and addresses of our new-found friends and mark the calendar for next December, when we would do it all over again.