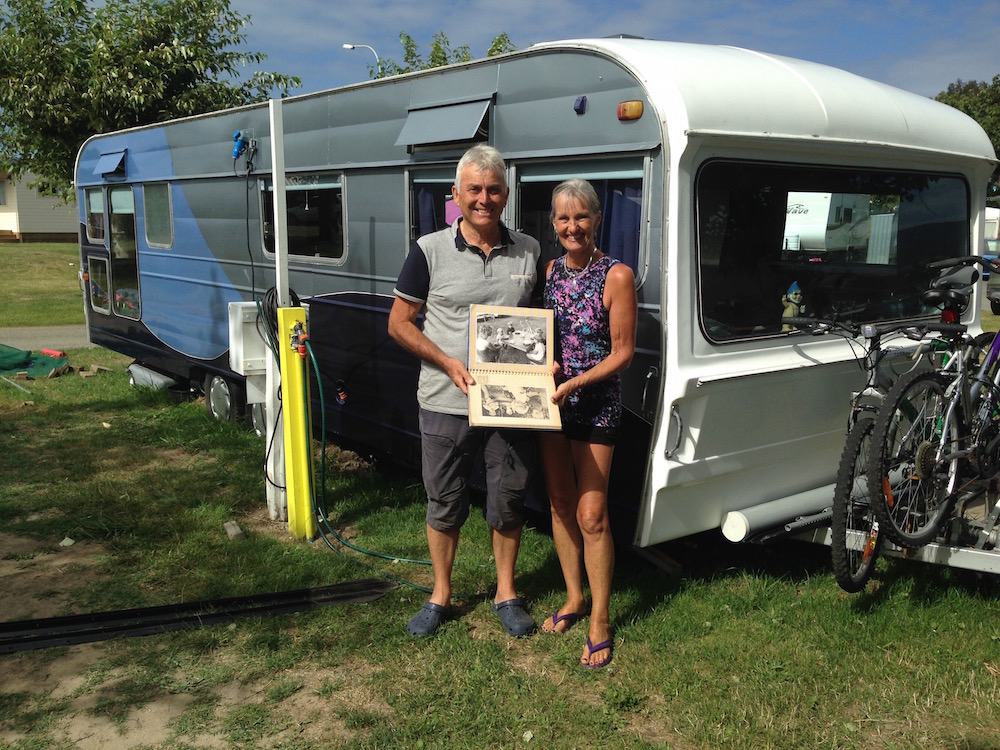 A dark blue wave intersects with patches of blue and silver in the striking custom paint job that adorns the sides of Jude and Dave Coursey’s caravan, which they inherited back in 1997 from Jude’s father.

The 25-foot home on wheels now serves as “caravan central” for Jude and Dave’s extended family during the three weeks they spend at Tahuna Beach Holiday Park each year. It’s stockpiled with old board games like Pictionary, Trivial Pursuits and Othello. A full size refrigerator, along with a small three-way fridge, stores the ingredients for a series of festive meals. The caravan is equipped with a bathroom where Dave shaves, but they haven’t used the shower in 15 years, with the camp showers so close by.

Like clockwork, Jude and Dave arrive at Tahuna Beach Holiday Park on 21st December each year and stay for about three weeks over the Christmas and New Year period, which also means Jude, who was born on New Year’s Eve, celebrates her birthday here.

“We’ve enjoyed many great New Year’s Eve celebrations,” says Jude. “Gathering for quiet reflection at the after party when the kids were young is a real highlight. I remember spending time with Barry and Pam Leslie, Southlanders. We accompanied a family friend of theirs, Roddy Maxwell and his wife Yvonne, playing bagpipes on the ‘first footing’ around the camp. It would have been in the late 80s.”

The “first footing” is a Scottish tradition, when the arrival of the first person to enter the household on New Year’s Day bearing gifts and entertainment is thought to bring good fortune for the coming year. Adapted for the holiday park, it involved a group of people walking through the campgrounds, while Roddy played bagpipes to herald the arrival of the New Year.

Now 64 years old, Jude has travelled from Christchurch to Nelson for a three-week summer holiday by Tahuna Beach every year since she was eight years old. When she was 18 and got engaged, Dave joined her, camping with her parents in their caravan. Then, in 1974, they camped with three-month old Tristan, the eldest of the couple’s four boys.

Over the following years, brothers Damon, Adrian and Hayden were born into the family and followed in big brother Tristan’s footsteps.

“Back in those days, we would lie the kids in the back of the car,” Jude explains. “We’d head off at 1am and drive through the night. It was a shingle road through the Shenandoah at the time.”

Upon arrival, the family pitched their tent beside a macrocarpa hedge where the permanent cabins overlooking the estuary now stand. When they were very young, Jude laid the infant boys outdoors beside the hedge for their day sleeps. The family rarely ventured outside the park during their three-week stay when the boys were children. After 25 years of “tenting it”, Jude and Dave inherited the caravan.

The boys have made life-long friendships with people they met in their younger days from as far a field as the West Coast.

Now in their forties and late thirties, the boys have all married and have children of their own – nine grandchildren in all for Jude and Dave. Thirteen-year-old Allaura celebrates her birthday on the same day as her grandmother. Slightly different configurations of Jude’s son’s four families join them for the three-week sojourn. Jude’s sister has joined them from time to time, as well as Dave’s brother Tony, his wife Glenda and their family.

Jude remembers the family’s 14 by 15 foot canvas tent with a seven foot veranda. The children slept on canvas bunk beds. It soon became a family tradition that during every year, the family would save up and buy something new for their Tahuna Beach holiday. In the summer of 2015-16, it’s a large Coleman dome-shaped gazebo.

“The square marquees just don’t survive the wind,” says Jude, who over the past 56 years has seen all kinds of weather at Tahuna Beach including several years of bad flooding.

While they didn’t venture far afield in the 70s and 80s, the family now makes regular trips into town to have coffee at Zumos – delighted that all 19 of their party can fit into the private meeting space called the “Bored Room”. They also enjoy an annual outing to visit Jude’s sister in Riwaka and afternoon tea at Jester House, where they shout everyone a cuppa.

Jude and Dave were preparing for their second son Damon’s 40th birthday during their visit this year and enjoyed trawling through old family photo albums.

“I realised then that all of our family photos are in Tahuna,” she laughs.