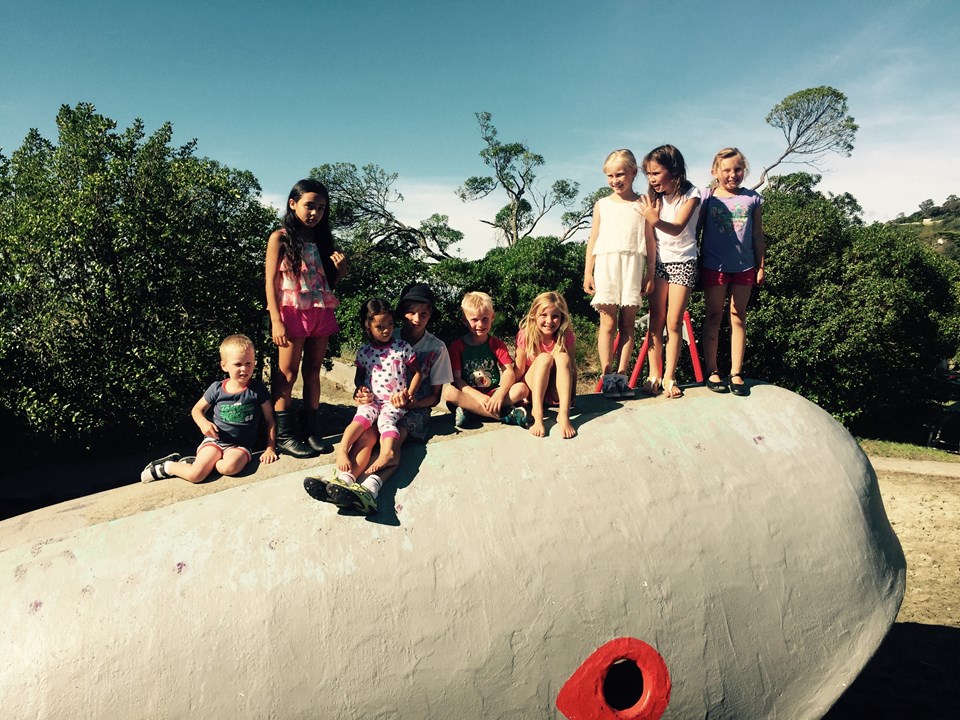 All the little cousins enjoying the Tahuna Beach whale

My story starts approximately eight years ago. My granddaughter said to me: “Why don’t we have a Cousins Camp?”

I had my eldest grandchild aged about 12 in the car with me and we heard a lady on the radio, from America, talk about how she and her husband were having a ‘Cousins Camp’, so they could get the cousins together to spend time with each other as they lived far apart. I was a little amused as although we had six children and quite a few grandchildren at the time, we all lived in the same town and the children who were school age all went to the same school. As a family we all attended the same church, so the cousins already interacted quite a lot. However the idea wouldn’t go away, so my husband and I decided we would have a Cousins Camp that summer, just for fun.

Then came the decision about where to go to have it. As we live in Motueka we decided we didn’t want to travel too far, especially with a trailer loaded with bikes, trikes, skate boards and roller blades, so we decided to book in to the Tahuna Holiday Park.

We booked some cabins toward the end of the Christmas holidays and put plans into place. It was a lot of organisation on my part, with food etc, but the parents all helped. After all they were going to have a few days to themselves. Off we went, and it was a great success. It was such a success that my little grandson Jack, four at the time, came out of his cabin on the last morning, and flung his arms in the air and said: “I could thtay here forever”.

They biked around, we went to the beach and had fish and chips, went to the hydroslide, played mini golf at the camp and hired the bikes that take heaps of kids, but the favorite place at camp was definitely the shop! I guess the staff shuddered when they spied a group of little children arriving with their assortment of coins.

The hardest part was getting them to sleep at night, but all in all every one had a great time. It was only a few months on from the camp that the grandchildren were asking about the next Cousins Camp, so it has become a family tradition now, and one no doubt the children will remember. We have had between 10 and 13 children at any time (as we have 18 grandchildren) and they must be aged at least three to come.

As the years have gone by three of my children have shifted from Motueka and so now the getting together of the cousins is greatly anticipated, and my husband and I get a lot of pleasure from watching our grandchildren interact and enjoy each others’ company. One year we had to have our camp early due to one family’s holiday plans, so we pitched tents on our lawn and held it at our place. I must admit I found easier, as I didn’t have to cart everything over to Tahuna, but the general consensus from the children was that it had to be held at Tahuna, so since then we have held it at your camp ground.

As the youngest grand child is only one year old, it looks like Cousins Camp will be held for some time yet.

Thank you Tahuna staff for your great facilities and the wonderful memories you have provided for us and our grandchildren.