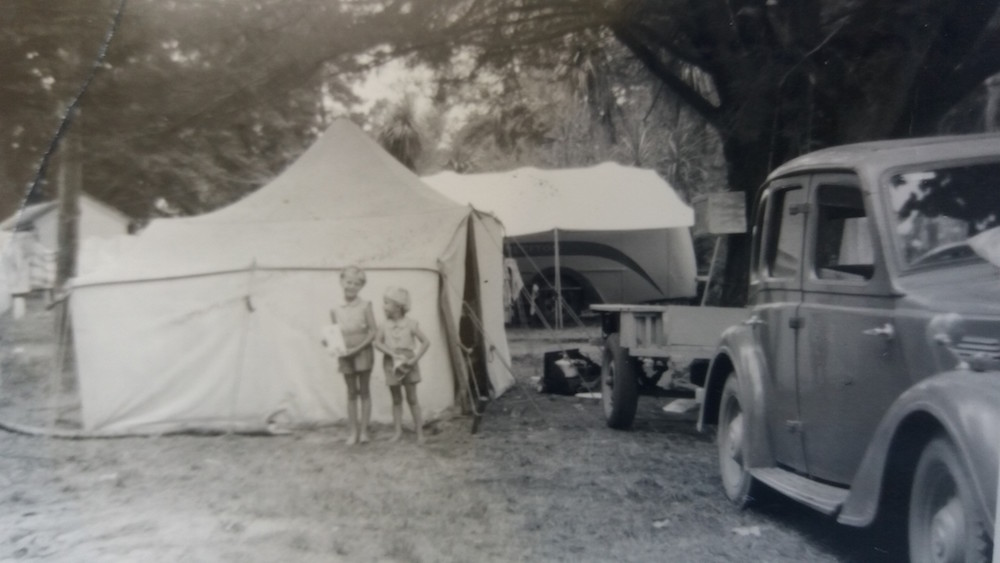 The Hortin family campsite in 1955

I was two years old and my sister was five when, back in 1953, our family made the first long car trip from Ashburton to Nelson – a tradition that continued for many years, with a trailer behind the car packed high with all the camping gear.

Our tent was a motor tent (green roof, white sides) which had openings that were laced up and tied and a wooden centre pole that was very high (well it seemed high as a kid).

Our clothes were packed in a set of wooden drawers that Dad used for storing tools in his shed during the year, and we had two camp cupboards which were made out of old tea chests, a table with four stools and a metal safe to store the food in the cool of the trees.

We slept on wooden and sacking camp beds and the floor always covered by a tarpaulin of some sort.

As soon as our tent was pitched, we would always drag our parents down to the beach for a swim (it didn’t matter that Dad had driven all day just to get us to Nelson and then pitched the tent).

We camped on a small hill with trees up the back of the site with other families and looked forward to seeing these families and children every year.

Across the road from our then camp site was a playground with swings and seesaws and plenty of sand to play in (the playground would be in yellow block if it was still there).

The light for the tent my family used was a kerosene Tilly lamp and the cooking was done outside on a petrol cooker that I remember Dad pumping somehow to get the fuel through.

Potatoes were always dug from our garden before we left home and stored in a sack in a hole dug in the hillside beside our tent.

I remember that there was a shop part way down the camp that opened at certain times of the day so that campers could get milk, bread and the morning paper and an ice cream if you were lucky.

We were entertained by the beautiful beach and every day as a family we would go down to there. Back then, Tahuna Beach had large sand hills and everyone sunbathed in the shelter of the sand hills before heading down to swim, so you had to be there early.

When it rained Dad often had to go outside to dig a trench around the tent so that the rain didn’t come in under the ground sheet.

New Year ’s Day was always special as there was a pageant for girls and boys. It was held down by the Surf Life Saving Club building on the main beach and King Neptune always came out of the sea covered in plenty of sea weed.

What a noise it was when they held the car racing and motor bike racing on the back beach sometime round New Year. Must have been when the tides were going to be low as lots of sand was pushed into piles around the outside of the track to stop the water seeping through.

What a crowd pleaser back then the Great Benyon was – many a night was spent watching in the amphitheatre which had walls of sand and planks of wood as seats and this was out on the back beach.

It has not stopped there – since our own daughters were very small we also travelled each year to Nelson for the Christmas holidays letting them experience what I did, and now our daughters come to Nelson each year with their own families.

My husband and I still make the trek to Nelson each Christmas with our caravan in tow and book the same site each year and, believe it or not is just about the same spot I camped with my parents as a child.

If my sister and I had not had such wonderful parents, we would never have experienced such a wonderful place for a holiday.