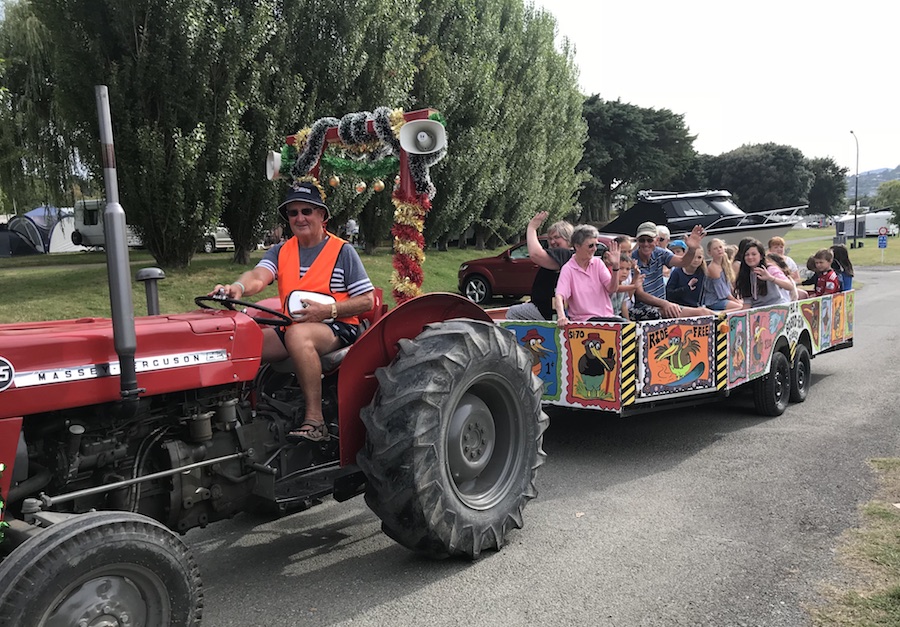 Every morning, weather permitting; Harry Osborne hitches the ‘fun trailer’ onto a bright red Massey 135 tractor and waits promptly near the Tahuna Beach Holiday Park gates for his passengers. The trailer, which is decorated in colourful comic-book-like postage stamps featuring kiwis in different costumes, seats about 40 occupants. Depending on how many children, parents and grandparents show up, he’ll depart more or less promptly at 9am to travel around the 54-acre camping ground. In the peak summer season, Harry will set off again at 10am for a second circuit.

“I end up being the Pied Piper,” Harry says. “There’s usually 20 or 30 kids on bikes, trikes and scooters following me.”

Harry’s wife Jean often accompanies her husband on at least one trip per day. She sits up the back, where she can keep an eye on everyone, and appreciates it when other adults join her, either on the trailer or in the throng following along behind them. “Everyone looks out for each other,” she says.

The fun trailer attracts passengers of all ages, from babes in arms to grandparents, like Norm, who is 80 this year. “They’re all really kids at heart.”

Harry has served as Tahuna Beach Holiday Park’s diligent ‘fun tractor man’ for the past 30 years. He started out towing a trailer behind a ride-on mower (blades up of course) before graduating to a Ferguson tractor. About eight years ago, he upgraded again to a John Deere tractor. Kierin, who works in the front office, lovingly refurbished the tractor now used, the Massey 135.

Harry and Jean, who lived in Gore for many years but are now based in Rangiora, have spent their summer holidays at Tahuna Beach every year for the past 49 years. They typically arrive three or four days before Christmas and stay for a month. They’ve always booked a site at the eastern end of the camp and, after buying their eight-metre house bus 15 years ago, have occupied the same site adjacent to the main playground.

They’ve clocked up about 1,000 nights in this bus. “A big chunk of that time has been here at Tahuna Beach,” says Jean, who counts the weather and the many safe cycle trails in the region as the two biggest attractions for them – alongside transporting thousands of their fellow guests each year. Two years ago, Harry and Jean cycled about 500 kilometres during the month they stayed.

Although it may seem this couple are always on the move, they have spent enough time at their campsite to form some lifelong friendships, and to support each other when loved ones are lost.

“Our camp neighbour Gladys Thornton died on Boxing Day seven years ago. This year we shared a meal with her son, who is camping two sites away.”

Their two sons, Hamish and Craig, accompanied them every year until they were in their late teens. Both sons, including Craig who now lives in Munich, have joined them from time to time.