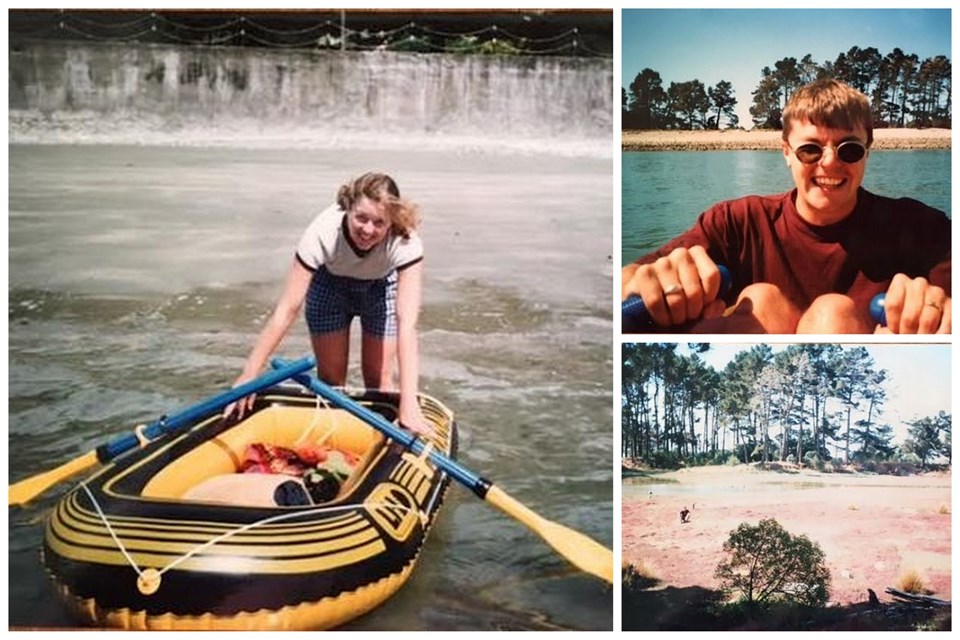 During the honeymoon, Liz and her husband bought a little two-child dingy and proceeded to row across to Haulashore Island

Early on in our relationship, my husband recognised the importance I placed on the annual pilgrimage to Tahuna, and fortunately he also enjoys the experience. So through thick and thin, we go to Nelson and seldom leave before our allotted time is up. But three times out of the last 20, we almost didn’t have, or complete, the holiday!

The first was our honeymoon year in 1997. We married just before Christmas and decided to head away to Fiji for the honeymoon and forfeit the camping holiday that year. But the Fiji experience really was a bit of a disaster. The beautiful resort (which for us was expensive) ended up being a real disappointment. The cockroaches were breeding in the empty adjourning cabins and this, along with cracked ablutions, ripped mosquito nets, green pool, broken bed, rough sand, lack of air conditioning and all other manner of let-downs, meant that after a few short days I really couldn’t take it anymore! Our travel agent made arrangements for us to come home early and we even got a refund for the days not stayed. We arrived home the day before Christmas, and you guessed it, we packed up the tent and headed to Nelson to finish off our honeymoon! As part of our adventure, we bought a little two-child dingy and proceeded to row across to Haulashore Island. Let’s just say, it was further away than expected, but well worth the effort!

The second time we almost missed a holiday at Tahuna was because we planned a three-week holiday to the North Island with friends who we didn’t know all that well. Let’s say it was an ill-fated affair which ended up with us and ALL our camping gear stranded in Tauranga without a vehicle. We decided to rescue the situation by using buses, trains and a ferry to get ourselves back across to Nelson where our car was waiting for us, and we completed the holiday in the trusty Tahuna Camp. We’ve never tried to escape the Nelson experience again.

The final occasion started out well in the camping ground, but we almost had to abandon it part way through due to a medical emergency. It was the year the first of Peter Jackson’s Lord of the Rings Trilogy hit the big screens. Going to the movies is something usually reserved for the annual holiday and this particular year was no different. We were hyped up by the media to see this movie and even though I found it was a good opportunity for a snooze, the rest of the family enjoyed the experience.

A few days later hubby started to complain of having a sore bottom (permission to share this story has been granted!). After two to three days he realised he had quite a good-sized hemorrhoid and that it wasn’t going away. He was finding it difficult to walk and decided it was time to go and see the doctor. Within 10 minutes the doctor had called Nelson Hospital and warned them that he would be coming up for an operation! I drove him there, had him admitted and by afternoon he was under a general anaesthetic.

After three days it was time to leave the hospital and, still in considerable pain, he was discharged back to the camping ground! We still had another 10 days of our holiday to complete and there was no option for him to sit in a car for five hours to get back home.

The hospital gave him a foam ring and some Panadol, and we even made life easier for him, moving the small tent right next door to the ablution block so he didn’t have to walk so far. Now that’s real love! For some reason the name ‘Lord of the Ring’ has stuck good and proper.

We now have friends who ask us, “So what happened on your holiday THIS year…?”