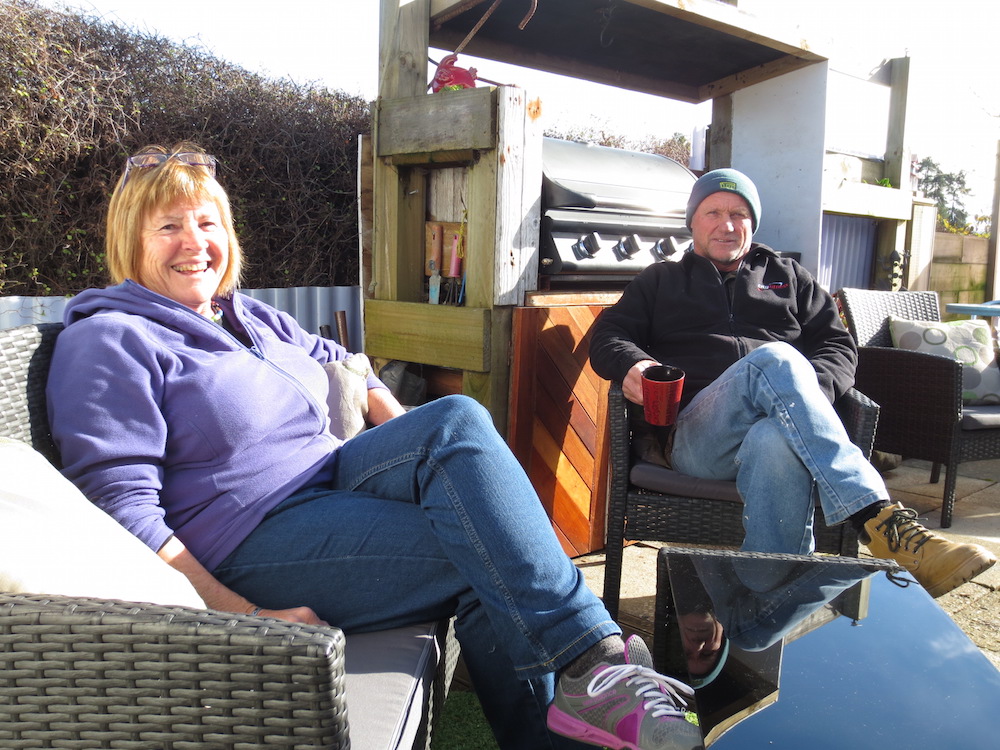 “We live here out of inspiration, not desperation.”

So declares long-time permanent camp resident Paul Dayman who lives with his partner Marion Whyte in an area of the camp its residents call The Heights. Looking west across the camp towards the snow-capped Mt Arthur Range, home is a comfortable caravan and insulated annexe, with a landscaped outdoor courtyard with built in barbecue and gardens.

It was around 2002 that Paul moved into the camp after arriving back in his hometown of Nelson following a 20 year absence. He was looking to buy a house when he wandered through the camp’s permanent section and realised he had found home.

He lived in the camp for four years before buying his current caravan. To describe it as a doer-upper is a classic understatement – the 40+ year old caravan was literally falling apart and needed repairs from the ground up. But for handyman Paul it was the perfect project. His love of boats and mechanical and light engineering experience meant he had the skills to transform it. Before long he had a perfect bachelor pad, complete with annexe workshop and tool storage, and his boat parked nearby.

However the happy meeting and pairing up with a former primary school classmate, Marion, has seen the caravan again transformed, this time into a warm, comfortable and funky home for two. Marion was living in a caravan below Paul and, as he puts it, one thing led to another, and she moved in. It must truly be love, for Paul’s tools and work projects headed outside to a shed to make room for Marion’s hobby, quilting. Fabrics stored in a collection of baskets and stacks of quilting magazines are stored neatly on white shelves along one wall of the annexe and her fold-down sewing table sits under a window with a peaceful sunny view out to the courtyard.

The other end of the annexe has a table and seating built by Paul and there’s more seating inside the caravan, alongside the kitchen, which he recently updated. Rounding off the layout is a spacious double bedroom at the far end of the caravan. There’s plenty of room to welcome friends, adult children and grandchildren, and life regularly spills outside to the sheltered courtyard, where there’s outdoor seating and a barbecue. “We tend to live half inside and half outside,” Paul says.

Part of the appeal of living in the camp is the relaxed lifestyle. “It’s a simple way of living and it suits me right down to the ground,” Paul says. “I have lots of freedom, no mortgage, very little maintenance, and consequently reduced living costs. Personally, I wouldn’t go back to living in a house.”

Paul is well-known around the camp and in 2015 was elected the first representative of the permanent residents on the board of the Tahuna Beach Camp (Inc) Association. This gives him a unique insight into the running of the camp and provides residents with a direct voice on its management board. To help keep residents up to date he produces a newsletter of snippets about projects, plans, residents and camp history.

It’s easy to see Paul loves being part of the camp community, which he describes as every bit as diverse as a traditional residential community. Some residents arrive to live in the camp at a time in their life when they are between homes or perhaps coming from a split marriage and while some move on many stay once they recognise its benefits. He says it’s a mistake to assume those who live permanently in camps like Tahuna are there because they have no other choice.

“Many are retired people who have downsized and enjoy the simplicity of living at the camp,” he says. “They don’t have a need for a house but still live very comfortably here. There’s a degree of security here too and people can call on others for help. There have been several who have lived here until they needed to move into aged care.”

Paul also points to a growing trend worldwide towards smaller homes. Living in close proximity at the camp he says is not a lot different to the higher density housing projects being developed and encouraged by local authorities.

“It’s tight community living,” he says. “It’s not for everyone but when you think of a community like Tahunanui, which used to be all quarter acre sections but is now a lot of flats or units with people living close together, it’s not so different. I consider it a privileged way of life.”