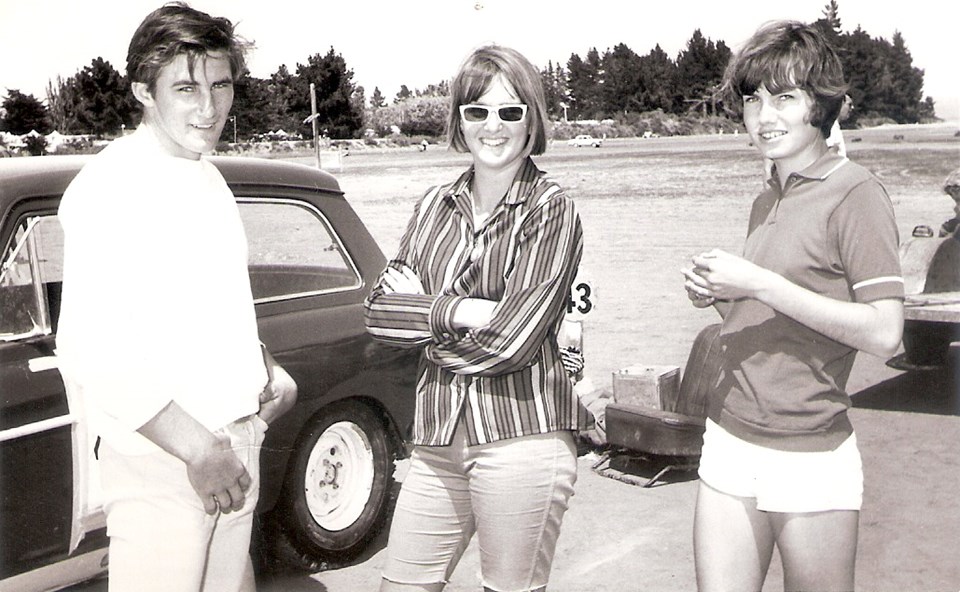 My connection with Tahuna began as a young child when my parents decided to start camping in ‘M’ block after staying in the Lodge Motels, which backed onto the camp with a gate into the camp. Family friends called the Bollands were camped at Tahuna and would visit us and Mum and Dad decided it was time to start camping.

I used to love watching the ‘back beach’ racing each year. As I grew up I would often be told not to go near the ‘A’ block ‘Bullring’ area where all the young boys would be! But at times my cousin was camped there, so of course I would go!

My sister Sue won the Tahuna Beach sand sculpture competition in 1971 and an article was in the paper with a photo of her and her sand turtle.

The back beach edge of the camp had an amphitheater with shows like the magician, The Great Benyon. The camp also ran talent quests there.

Later my husband Dave was allowed to come up as my boyfriend to stay in the awning with a very very loud snoring Dad – Gavin Derrett.

We married in 1971 and since 1973 have spent all but one Christmas in camp with our four sons. We have pretty much stayed on the same site, although at times the camp changed sites layout. One involved us being moved over to the estuary frontage (now known as Beachview) but I froze as we lost the precious sun at 3pm.

We met lots of lovely people over the years and formed family-like bonds with them as our boys grew up and they in turn made long lasting friends. Sadly too we have also lost some special friends over the years.

One year when we had some very high tides a small shark come through the drainage pipe into the ‘O’ block area. It was very exciting for everyone.

For a year or two on New Years Eve we had a midnight march around the camp called ‘1st footing’, following a bagpiper and gathering people along the way.

The decision to put all the young people into ‘O’ block resulted in a riot one year. After that they were spread among family groups, which resulted in us all getting no sleep for many hours into the early morning – clearly not one of the good ideas!

Our four sons all come camping and spend as long as they are able each year. We now have a very busy camp site, often with all nine grandchildren in the van playing the old board games together.

I started camping here with Jude’s family in the late 60’s, a couple of years before we got married. The Christchurch contingent in ‘M’ block consisted of many members of the Canterbury AA Caravan Club and was a bit like their weekend rallies without the rally organiser.

We started camping on our own in 1973, initially with a car and roof rack and then, when the children came along, with the father-in-law’s trailer. We started out in my Dad’s motor tent, then our own motor tent, then both motor tents, one to live in and one to sleep in, before buying our first frame tent in 1978.

Like a lot of families with young children we used to travel early in the morning with the children lying in their sleeping bags (no seat belts in those days) and on occasion arriving in the camp at 7am.

We continued tenting until the late 90’s when we inherited the caravan we have now from Jude’s dad.

In the 1980’s my parents, John and Alison Coursey, began an annual six-week holiday in February and March, caravaning in ‘F’ block. They made firm friends there with a group of fellow campers, to the extent of touring overseas together on a couple of occasions.

Mum and Dad camped into their mid 80’s, generally having a swim in the sea every day, a tradition we haven’t followed.

We have seen the camp morph through different stages with new ideas over the years – some very good, others not so good, but we still love coming back every year.