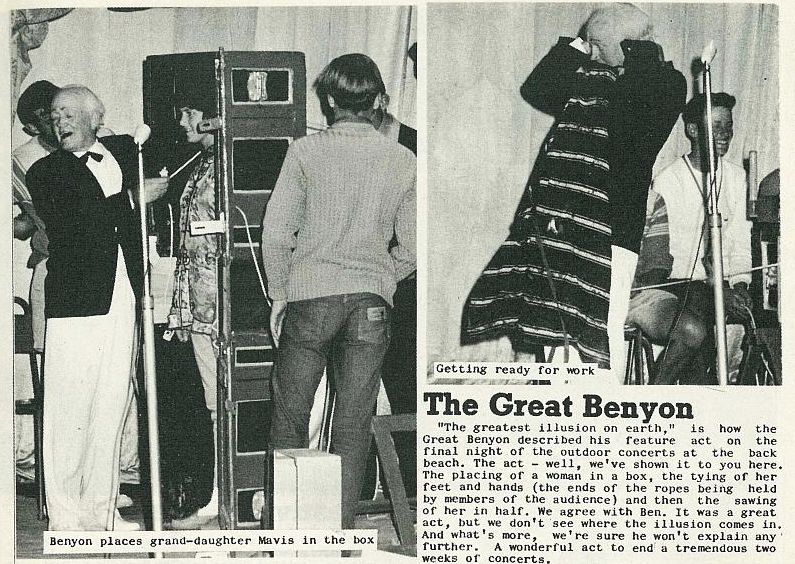 Growing up in Ashburton as the youngest of five, I made pocket money for being a nuisance to my older sisters whose boyfriends paid me to stay away! My family and our neighbours travelled to Nelson and Tahuna beach for our annual Christmas holiday. Our caravan, driven by Mum was towed by a PAX Vauxhall which boiled EVERY year on the Whangamoa range.

When you are a kid on holiday all adventures are Magic, but the day I assisted the Great Benyon was what memories are made of. To a little kid the Great Benyon looked a lot like Colonel Sanders; he was legendary to the Tahuna faithful. During a performance he called me up on the stage and placed a top hat on my head, cracked two eggs into it then pulled out a dove and whispered to me not to tell how he did it. With the lollies he gave me I joined my friends in the crowd and to this day I have never told… because I have simply no idea!

Making your own entertainment and spending your own money was all good fun. One Christmas break three of us collected 150 dozen empty bottles and smuggled them out of the camp in a covert operation so as not to be seen by the Park Rangers who usually made extra income on the side by collecting bottles. Bound for the local brewery we were then paid 5p a dozen. This divided up to the princely sum of 1 pound 17 shillings and 6 pence. With my share I bought a Lincoln Tucker Box and a pup tent.

The mud flats at the beach were the venue for the drive-in movies. Many a story can be recalled when cars became stranded on an incoming tide after the evening session… perhaps if the windows were not fogged up, the teenage occupants may have been more aware of their surroundings!