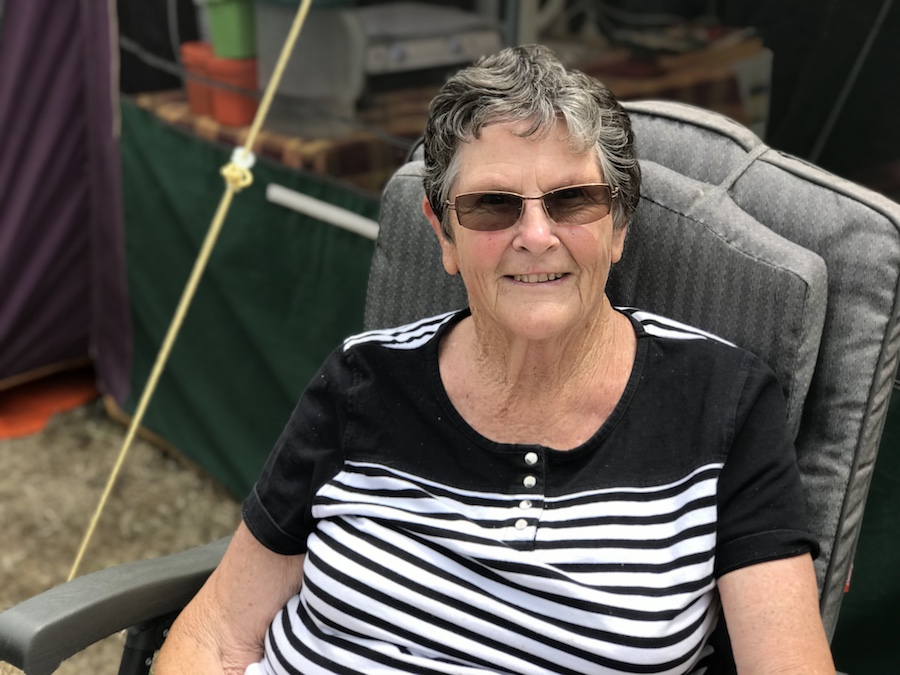 When friends and family drop into Tahuna Beach Holiday Park to visit Jocelyn Robertson, they know to drive directly to the guest entrance off Parkers Road and they’ll find her in the so-called ‘green zone’ somewhere between the willow trees and the estuary. This is the 49th year Jocelyn, who is now a great-grandmother, has seen in the New Year at the holiday park. She has always occupied a site in the leafy western end of the park, where she has watched the tide come and go for roughly three weeks every year (bar one) for the past five decades. Her four children spent their childhood summers here and, more recently, have periodically camped nearby with partners and their own children.

“I’ve got 11 grandchildren now, and every one of them has spent at least one summer at the park,” Jocelyn tells me, as we sit outside her tent in the mid-afternoon sun enjoying the sea breeze. “The family like using the estuary beach.”

For the first couple of decades, Jocelyn and her late husband Arthur brought a caravan to Tahuna Beach for their summer holidays, but when she was widowed 23 years ago, Jocelyn decided it would be easier to camp – despite being the one who drove the caravan all the way from the family farm in Waimate because Arthur had poor eyesight. She set off to a camping shop in Oamaru to buy the tent – and only chose the traditional green and purple square canvas tent with a large screened awning after pitching it, to make sure she could put it up by herself.

This year, Jocelyn’s family were unable to join her at the park – with other commitments, including a teaching job in Saudi Arabia and a date with some fish in Luggate, keeping them away. When she arrived just after Christmas 2017, after driving up alone from where she now lives in Geraldine, Jocelyn found eight old friends waiting at her campsite, ready to help pitch the tent.

“I’ve made it easier for them,” she smiles, “by colour coding the poles.”

For the third year in a row, her close friend and business partner John, who lives in Blenheim, also joined Jocelyn. The two were childhood sweethearts but went separate ways and Jocelyn then met Arthur. Coincidentally, John wed his wife on the first anniversary of Jocelyn and Arthur’s marriage. In 2013, on the day she arrived at Tahuna Beach Holiday Park, Jocelyn learned that John’s wife had died so she wrote to him to offer her condolences.

“He called me almost straight away and we spoke for two hours,” she recollects. “Now we own a race horse together and he’s camped here with me for the past three years.”

Many other enduring friendships have been formed over the years at the camp, with many of those around her also making the journey from either Canterbury or Otago. Jocelyn waves in the direction of the willow trees, where John and Dawn Briesman have parked up. “Dawn was born in the same hospital in Mosgiel as my youngest son Lindsay, only a day apart. She calls him, ‘my roomate’.”

Tahuna Beach Holiday Park has been the base for many adventures in the region over the years. “I even went to a music festival near Tapawera one year.”

When asked what the biggest change has been over the years, Jocelyn says, “It costs me three times as much in petrol to drive here.”

Jocelyn also remembers some very wet years over the past five decades – including a couple of days this Summer; the kids have enjoyed biking and paddling in a transitory creek that formed along the southern boundary of the park, an orphan left behind after a king tide.