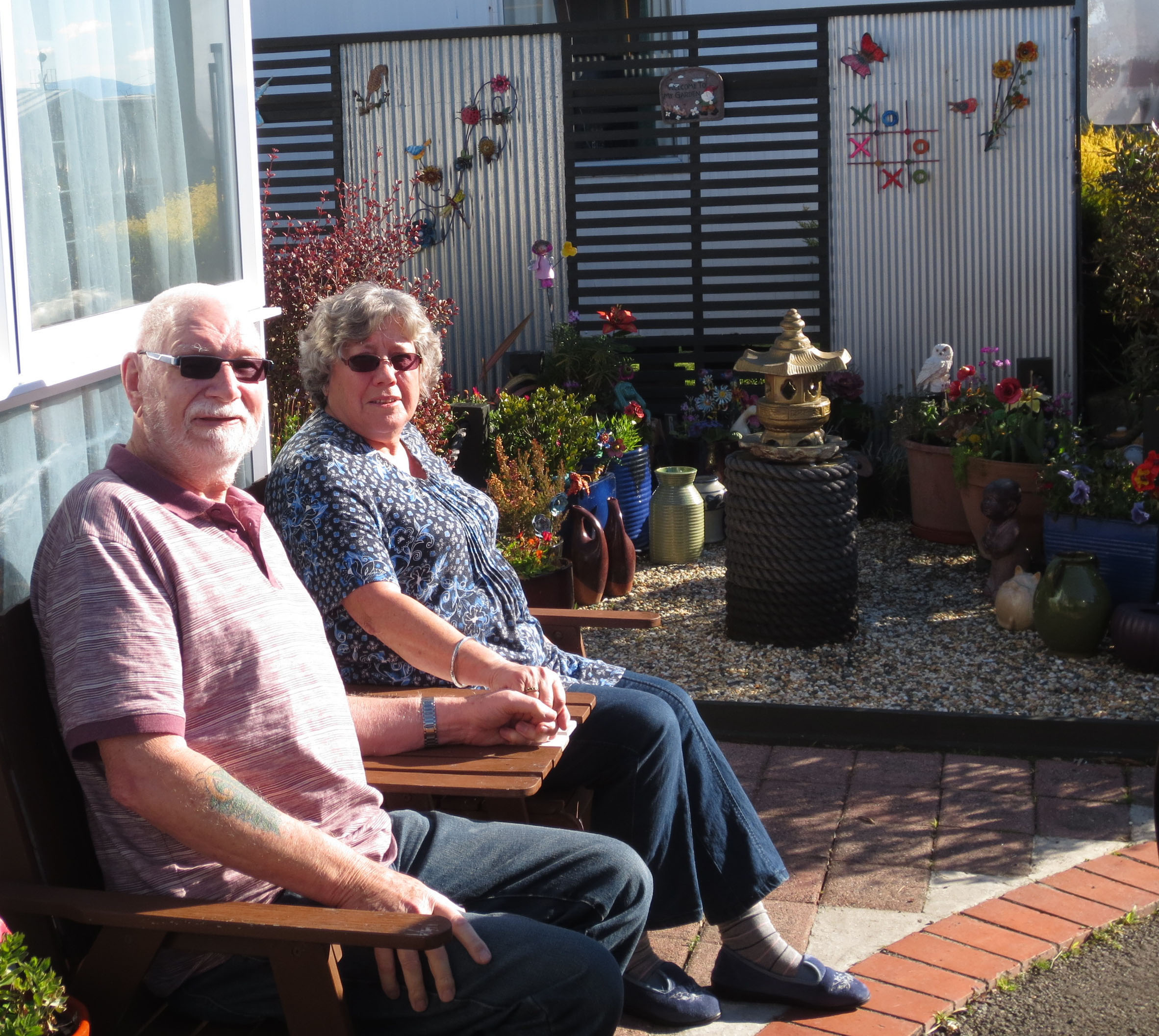 Itchy feet have seen Bob and Trish Ryder take to the road around the country in house buses and caravans through the decades but now they prefer sandy feet as permanent residents at Tahuna Beach Holiday Park.

The couple have lived in the park since 2011 and say the decision to swap moving wheels for chocked ones was the best decision they’ve ever made. Bob grew up in Nelson and spent time in his youth enjoying the beach environs, including roller hockey and car racing on the back beach.

Living in the North Island, the Ryders used to take their children on camping holidays and once they all started working, Bob and Trish headed off themselves in house bus to see the country. Sometimes they were only away for a few weeks’ holiday, but other times they lived in their house bus, parking it on rural properties, including one at Nelson’s Todd Valley, where they lived for two years.

“Then we decided to settle down again,” Trish laughs. They sold their house bus and bought a property at Seddon in Marlborough, which kept them busy for three years. But itchy feet need itching and the desire to travel saw them taking short trips over to Nelson in a caravan, where they stayed several times at the holiday park.

After another stint living in a traditional house, this time on the West Coast, deteriorating health saw the couple deciding they needed to move closer to specialists and hospital care. It was while staying at Tahuna that they noticed the permanent resident sites and everything fell into place.

Not keen on large cities and towns, Nelson offered all the facilities and health care they needed, while the holiday park provided the simple accommodation option they preferred – a comfortable caravan and annexe set in what Trish describes as their “54 acre back yard” – the camp. “We can go anywhere we like in the camp, we have the beach and the reserve, all without having to go onto a road. If you need help, there’s always someone around, and it’s only 10 minutes to the hospital.”

Bob agrees, declaring that it’s lovely not having a mortgage, large grounds to look after, rooms they don’t use (“We used to have a large, three-bedroom home. Well that’s no use to us!”), large bills for heating or water and expensive maintenance.

“Many older people are asset rich and cash poor,” Trish says. “This way, it’s half and half – we own the unit but pay rental on the site.” An added bonus, Trish says, is that the park’s staff are very good. “They know us by name and say, well, this is your home.”

With all their experience holidaying in caravans and living permanently in the house bus, making the big move to the holiday park felt like coming home. “We slotted right in,” Trish says. “You do need to be more efficient though, you use something and then put it away.”

The couple are completely self-contained, with a shower in the caravan and a toilet and bathroom at one end of the annexe. And they have everything they could possibly need. In the annexe living room are two comfy armchairs and a family heirloom dresser, as well as a TV, computer and stereo. There’s also room for Trish’s hobby, beadwork and making colourful decorative tin ornaments and hangings.

At the annexe entry is a useful sunroom and storage space and outside a small courtyard area is established with a pottager garden, shrubs, seat and garden shed. Bob fills his day with “a bit of this and that” and they both enjoy sitting in the sun and watching the world go by, waving a cherry hello to people walking by.

The couple still occasionally get struck with wanderlust and head off for short breaks. But they love the relaxed lifestyle of the holiday park when they return home. “We don’t worry too much about what the time is or even what day it is,” Trish says. “It doesn’t matter!”

And at Christmas and New Year when the hundreds of holidaymakers flood in for their spot in the sun, Bob and Trish say they hardly even notice them. “We’re tucked away here and were surprised our first summer at how many people were actually staying here. We couldn’t even hear the concerts at the back (of the park).”

“Living here is the best of both worlds. It was a lifestyle choice and we’re quite happy in our little nest.”