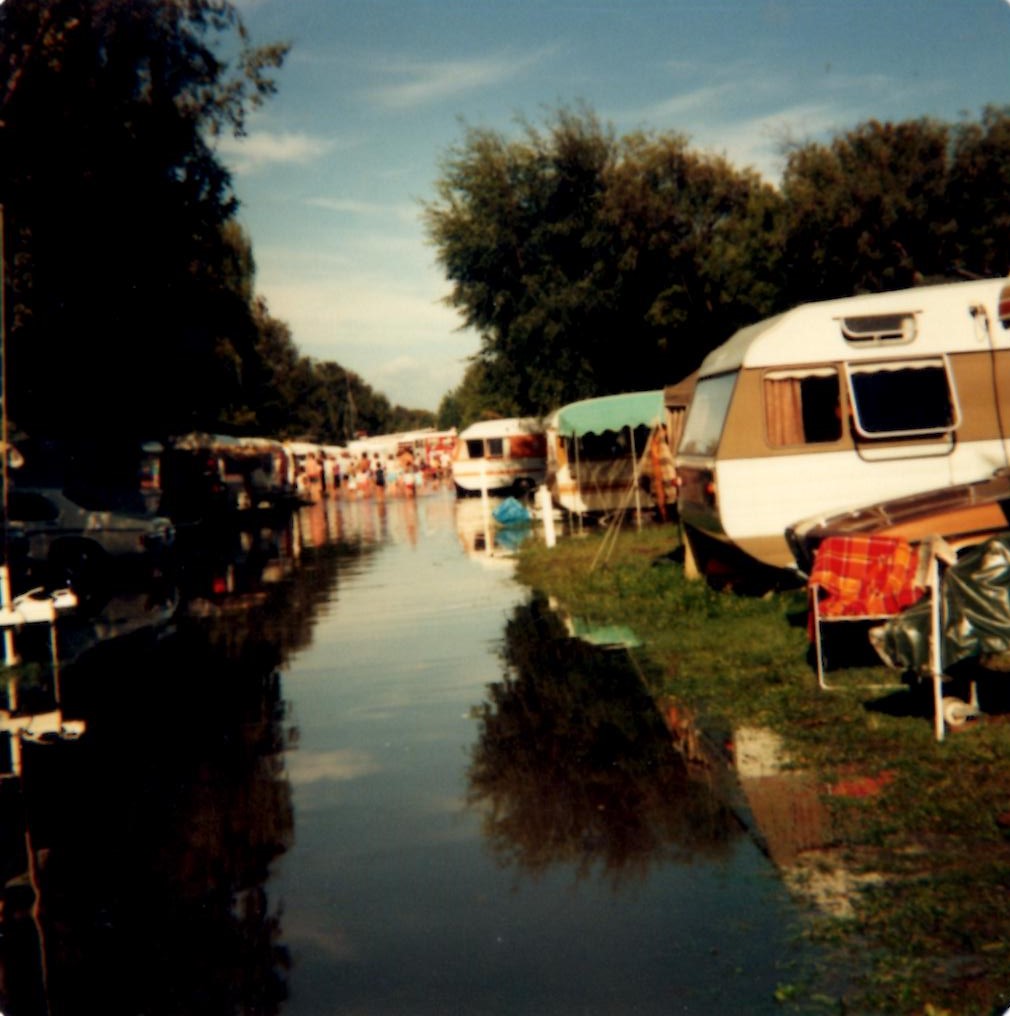 Flooding at Tahuna Beach Holiday Park back in 1986

At first it was just a rumble in the distance that barely disturbed the quiet summer night. I needed to go to the toilet block, but I wasn’t going anywhere with that strange noise around. I squeezed my eyes shut and shuffled further into my sleeping bag. Perhaps if I ignored it, it would go away. Dad was snoring loudly on his stretcher bed over the other side of the tent. I concentrated on that, trying to forget the other sound. It worked, until the rumbling came again – louder this time. I looked around our dark tent. Everyone was asleep.

Stepping onto the old yellow mat beside my stretcher, I crept over to Mum and shook her. “There’s a scary noise.”

Mum blinked a couple of times, listening as she woke up. The camp was quiet. She shook her head. “No, there’s not. Go back to bed.”

I sighed. There was no point arguing even though I wished I could cuddle into her sleeping bag with her. As I padded back to my bed, a bright flash lit up the white walls of our tent. Mum sat up and started to speak, but her words were taken by a loud boom of thunder. I stalled in the middle of the tent, my hand on the centre pole.

“Go back to bed. It’s just a thunder storm.” As Mum spoke, the first heavy drops of rain began to patter on the green roof of our tent. I smiled. Rain would drown out the scary thunder. I climbed back into bed. The thunder crashed again. And again. I put my head under the pillow,. My little sister’s hand appeared beside me and I took it, both of us squeezing each time the thunder rolled. The rain was heavy, too heavy to talk to each other. But squeezing worked just as well.

“Are you alright?” Mum pulled my pillow from my head and shone a torch in my eyes. She was almost yelling over the rain. I nodded. “Dad’s gone outside to dig a trench so the water doesn’t come in. I’m going out to help him.”

“But…” She was leaving us alone? With the thunder? And the lightning? And the loud, pounding rain?

“If you need us, yell. We’ll be right outside.”

She slipped into her Jandals and yellow PVC jacket, untied the door and left. I could hear the thumping of dirt being bit into by a spade outside, and occasional words. I wished they’d hurry up. I still needed to visit the toilet block. The thunder was loud and constant, each blast echoing from one side of the hills to the other, finishing as the next blast began.

Mum and Dad finally came back inside, piling their wet coats next to the door and lacing it closed. They shone the torch around the tent. Everything was better with a torch. Mum smiled. “Close your eyes, it’ll be gone soon.”

I couldn’t wait any longer. “I have to go to the toilet.” Mum’s eyebrows rose. “Are you sure?”

Of course I was sure. I nodded. She handed me her dripping jacket, then crouched and fiddled with the door laces while I bounced on my toes, wishing she’d hurry. She shook her head. “I can’t get it open. The laces are stuck.” She looked across the tent. “You’ll have to use the bucket.” Part of me was relieved. I didn’t want to go out to the toilet block in the storm. The rest of me was mortified. But I was also busting. After I was done, Mum tucked me back into bed. My sister reached out for me the moment Mum was gone, and I took her hand, wishing the storm would leave so I could sleep.

The next day, we weren’t allowed to drink water from the taps. Dad made us walk down to the office where we collected water delivered by a tanker. Some of the streets in the camp were filled with water, making it seem more like Venice than Tahuna. Not that we cared. Once we’d had our swim at the beach for the day, the previous night’s storm would be the last thing on our minds.

About the author: Hayley Barrett has been coming to Tahuna Beach Holiday Park for almost 40 years. She now brings her own children, who look forward to it each year just as much as she does. Her grandparents started the tradition by bringing her mum and aunty to Tahuna about 60 years ago. That means her children are the fourth generation of her family to holiday at Tahuna each summer.