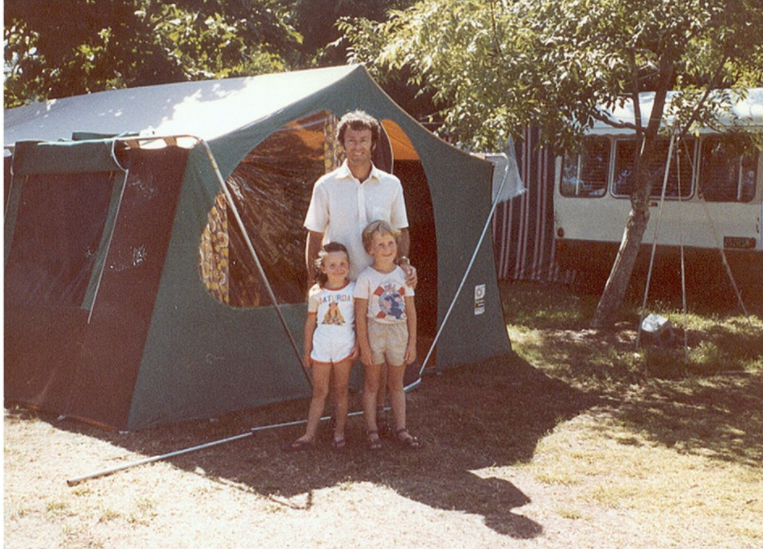 There are still only two of us, but we manage to fill up the biggest tent that you can buy, just fine. Luckily the sites at Tahuna are large enough to cope with it. We have a room set aside for a dressing room and games storage; a bedroom wing with a generous airbed and bedside cabinets and lights; then there’s the kitchen room with table, bean bags, fridge and shelves my dad made in the 1980s. Finally we have the awning, which hosts another table for meals and games, and the walls come up and go down depending on the day.

We are so in love with our tent, that as soon as we found out the company wasn’t going to be making them anymore, we bought a friend’s old one and we have it waiting for ours to give up the ghost. Our current one is 10 years old and still going strong. It’s had the odd repair from time to time, but as we found out with the original family tent, the Great Outdoors Tents were built to last.

From memory, the original tent lasted for 25 years! In the early years, Dad took it in to have a small repair done on it and when it was returned to him, a new roof had been put on. The problem was, it didn’t need a new roof. They’d muddled the job with someone else’s tent. So Dad got the old roof added on as an awning.

We kids progressed to having our own little tents on the site, and then finally Graham and I were gifted the family tent when Mum and Dad upgraded to a caravan around 2005. We enjoyed a couple of years in the tent before a spectacular storm in Christchurch flattened it while we were using it to store furniture when carpet was being laid. There was some sadness in saying goodbye to our trusty second home, and I was nervous about buying a “new” tent with a different smell.

Just last week I was around at Mum and Dad’s and the old tent is still being used on their property – to keep the firewood dry!

So, going by those calculations, we have at least another 15 years in our current tent and then 23 more years in the next one. That puts me at 77 years of age and Graham will be 82. God willing, we still hope to be camping at Tahuna then!