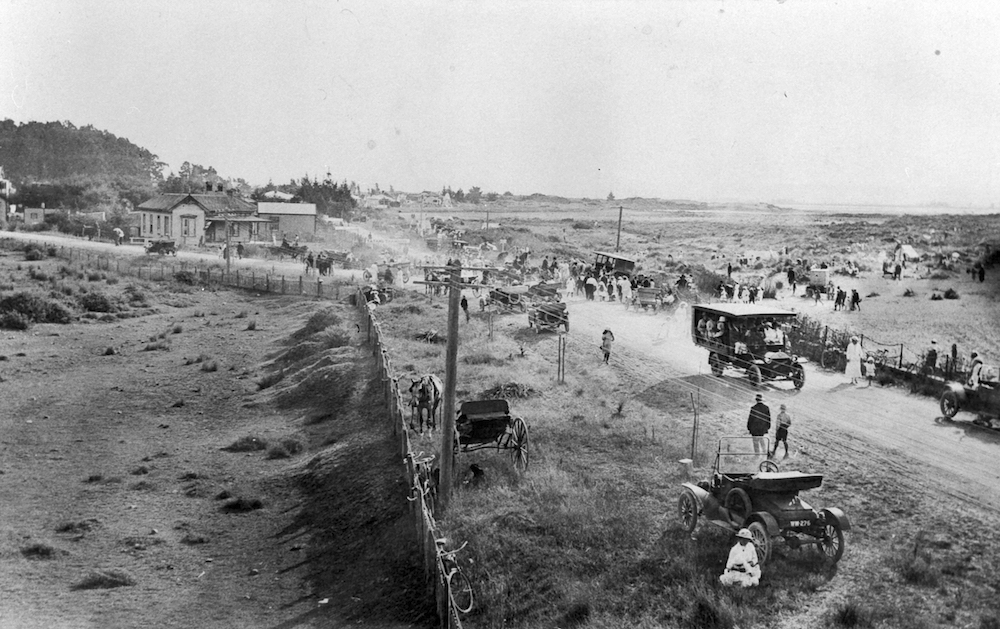 Maori first settled around the Waimea Inlet over 600 years ago. Successive tribes made their camps and settlements on the coast and islands. One of the oldest of these camps was located near the junction of Bisley Avenue and Rocks Road (then at the edge of the Waimea Inlet). Nestled in sand dunes this location allowed people to harvest kaimoana from both the inlet and the open waters of Tasman Bay. Archaeological evidence includes fish hooks (including some of moa bone), stone drill points of argillite (sourced from the Nelson Mineral Belt and used to make fish hooks), and a large number of argillite flakes left behind by adze makers. Bones from the midden show that snapper, kahawai and barracouta were the most common fish species caught and other food included moa, weka, pigeon, spotted shag, Polynesian dog and Southern fur seal. Dates from charcoal show that people were living here around 1400 AD.

When Europeans arrived in Nelson, the main channel draining the Waimea Inlet crossed the present-day beach. Sailing ships (up to 500 tons) used the channel to access Parkers Cove (the Black Stump) where livestock was unloaded for nearby quarantine yards (Quarantine Road).

The first European house at Tahunanui, Penton, was sited on the hill above Rocks Road. It was used as a sailing mark for vessels entering the Waimea River. Owner Henry Thompson, Nelson’s Resident Magistrate, started building in 1842. His death at the Wairau the following year abruptly ended progress and the neglected house was demolished around 1856.

Edward Green, tailor turned farmer, extended his Bolt Road holding to include the triangle between Tahunanui Drive, Parkers Road and Beach Roads. His first wooden home burned down but his second became a Tahunanui landmark, sited about the end of what is now Roto Street.

The Waimea Bank breached, forming a new channel, and by 1882 the old channel was dry at low tide.

After seven years of sea wall construcion, Rocks Road opened in 1899. Prior to this the carriageway to Tahunanui was via Annesbrook with many people using a low tide route around the rocks on foot and horseback.

Executors of the Green Estate agreed to sell the Tahunanui sand flats to the city council. A 1910 Declaration of Trust stated the land was for the “health, amusement and instruction of the inhabitants of the City of Nelson …”. The Nelson City Council held ownership of the land, after considerable dispute with the Nelson Harbour Board who declared it part of their foreshore endowment. The Tahuna Progressive Association was formed to improve beach facilities and landscaping.

The Tahuna Sands Association was formed to look after the Reserve at which stage the Nelson City Council was prompted to provide significant funds for improvements. It did not proceed with the Association’s grand scheme, which included boulevards and a two-storey restaurant.

Bisley and Moana Avenues were completed in 1929, opening up much of the hillside for housing.

The Tahuna Sands Association made considerable ‘improvements’ to the beach including Hounsell Circle and the establishment of the Motor Camp. More than 1000 campers stayed there in 1938.

An area that had been levelled for a wartime anti-aircraft gun battery (current skating rink) was leased for a dine and dance building during this time. The annual back beach motor races (with the later addition of motorcycle races), became a highlight of the Nelson calendar from 1949 until 1977.

The roller skating rink was constructed and a surf club was formed. A summer highlight was the annual beach carnival.

The Council had direct control of the Reserve after terminating the lease to the Tahuna Sands Association in 1961. Various projects were untaken, despite extremely serious beach erosion.

Beach erosion once again resulted in much public concern. A community assisted coast care project was started, the stormwater drain by the eastern carpark realigned and design changes to the sea wall were made – all aimed at reducing erosion. A long term Reserve Management Plan was developed by Council, which has resulted in many changes to landscaping and facilities including artworks, model railway extensions, fun park and recreational additions.

This information was written for the Nelson City Council Heritage plaques at Tahunanui Beach. Reproduced with permission.